Museums ("The Hohenzollerns in Franconia" /
Frederick the Great Army Museum) 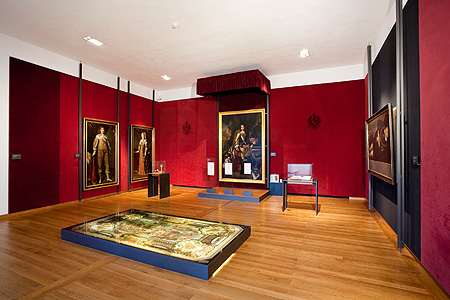 Museum "The Hohenzollerns in Franconia"

Princes and kings from the House of Hohenzollern significantly influenced the course of German history. The museum in Plassenburg Castle documents the history of this family – once burgraves of Nuremberg – who became powerful in Franconia and ruled here until 1806. Governing from the two centres of Ansbach and Kulmbach/Bayreuth, they shaped the development of Central and Upper Franconia by supporting the Reformation, encouraging the settlement of the Huguenots and introducing economic reforms. Franconia was the Hohenzollern’s power base for expanding into Brandenburg and Prussia. When the Franconian hereditary lines died out, the Prussian kings took over the Franconian homelands, which they ruled from 1792 to 1806

The new museum in the magnificent residential rooms of the 16th-century castle illustrates the life of princes in the Baroque age. It traces the progress of the Hohenzollerns from the Middle Ages, through the two margraviates of the 17th and 18th centuries to Prussian dominance and the endeavours of the Prussian kings to preserve the Franconian monuments of their family

The museum was established together with the »Haus der Bayerischen Geschichte« (House of Bavarian History) and the State Collections of Bavaria, in particular the Bavarian Army Museum.

The museum in the most important Hohenzollern fortress in Bavaria has the largest existing collection of old Prussian military items dating from 1700 to 1806, which are on display in 32 glass cases.

It documents the outward appearance and inner structure of an army which altered the course of history on the battlefields of 18th-century Europe and focuses in particular on the time of Frederick the Great (1740-1786).

The infantry and cavalry are described in detail, as well as the social structure of the troops. The main exhibits are firearms, swords, flags and paintings. The museum was established jointly with the collector and historian Bernd Windsheimer.

The Army Museum, the Margravial Rooms and the castle church can be visited without a guided tour.

Guided tours on the castle (outside; in German)
1 May-30 September:
every Saturday at 2.15 pm
(approximately 90 minutes)

Castle ticket: 7 euros
(including the municipal museums at Plassenburg Castle)

No parking available at the castle

Landschaftsmuseum Obermain
(Museum of the Upper Main Region, run by the town of Kulmbach)