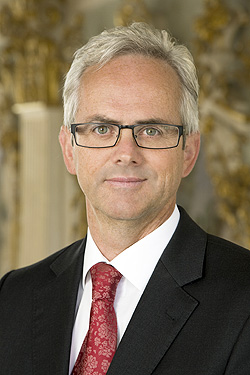 The Bavarian Administration of Palaces, Gardens and Lakes has been headed by Bernd Schreiber as President since October 2011. Since the Bavarian Palace Administration was founded in November 1918, the current President and his eleven predecessors have been supported by the president's department – also known as the central and property department.

This has the usual central administrative functions of a staff department, i.e. it provides a framework for the work of the three specialized departments (museum, building and garden departments). The ten divisions of the president's department, coordinate and support not only the work of the central administrative departments, but also that of the external administrative offices. This includes budget planning, controlling, data processing support and responsibility for all legal matters. Personnel, including further training, is an important area of responsibility: in the summer season around 1200 people are employed at the various properties, including gardeners, museum and car park attendants, palace guides, maintenance personnel, seasonal workers and administrative officials.

The second main area of responsibility is press and public relations work; this also includes the Internet and media as well as the photo archives and the numerous publications. The varied assortment includes exhibition and inventory catalogues, coffee-table books and cultural guides as well as academic publications. The work however also involves cooperation with tourist associations and marketing, regulating opening times and admission charges as well as working with a wide variety of event organizers. More than 2,300 events, including concerts, readings and exhibitions were held for example in 2004 in the rooms of the various properties.

The third main area of work is the administration of property and all matters relating to the use of the lakes. The president's department is responsible for 400 state-owned rented apartments or staff apartments in the palace and park areas, as well as the leasing of restaurants, cafés, hotels, kiosks, museum shops and shops belonging to the KulturGut AG, and regulates use of the lakes. These leases, rents and other charges are the Bavarian Palace Administration's main income – in addition to the admission charges. 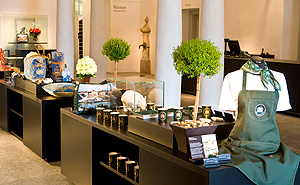 The duties of the property and lake administrators are not however limited to the management of this income. Their task is rather to obtain private support for the ideas and work of the specialized departments, by for example arranging contracts or entries in the land register. They also have an additional duty with respect to the 21 lakes in the foothills of the Alps which involves protecting the constitutional right of citizens to enjoy nature.