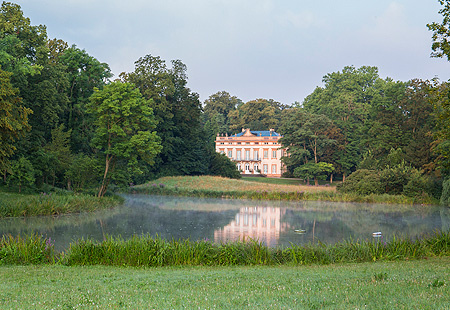 Schönbusch Park originated as a deer park southwest of Aschaffenburg, the second residence of the electoral archbishop of Mainz. Begun in 1775 and based on the ideas of Wilhelm von Sickingen, minister to Elector-Archbishop Friedrich Carl von Erthal, it became one of the first gardens in southern Germany in the new English landscape style. The various buildings were designed by the court architect Emanuel Joseph von Herigoyen. In 1785 the Schwetzingen court gardener Friedrich Ludwig von Sckell, the most important garden designer of the Goethe era, was appointed to complete the landscape garden. Scattered throughout the park in scenic settings are various architectural features: the Red Bridge, the Philosopher’s House, the Schönbusch Palace Temple of Friendship, shepherd’s houses and a tiny village, a dining hall and a maintenance building as well as artificial ‘hills’ with a viewing tower and the Devil’s Bridge.

The neoclassical garden palace, built from 1778 to 1782 from plans by the architect Emanuel Joseph von Herigoyen, is aligned with and visible from Johannisburg Palace. Its ten state rooms with furniture in Louis-Seize style and the reconstructed coloured wall coverings printed using a complicated technique serve to illustrate the princely life style at the end of the 18th century.

In the park visitor centre (former kitchen building) the exhibition "Everything appears natural, so well concealed is the design" informs about the history and development of the park.

May-3 October: Saturdays, sundays and holidays:
11 am-6 pm

Palace
Guided tours in the summer season every hour on the hour (in German; approximately 25 minutes; last guided tour 1 hour before closing time)

Rooms in the palace only accessible via staircase; visitor centre at ground level

Car park at the park entrance