Treasury in the Munich Residence 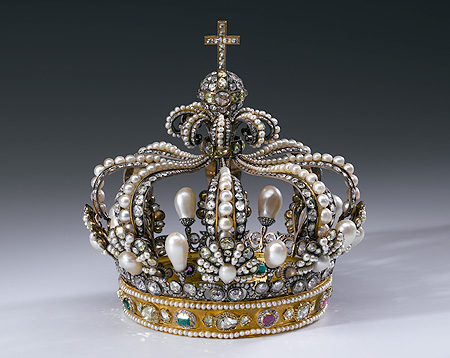 The display of jewels, goldsmith's work, enamels, crystal objects and ivories in the Treasury of the Munich Residence is the result of centuries of avid collecting by the rulers of Bavaria. In his will of 1565 Duke Albrecht V stipulated that particularly valuable ‘hereditary and dynastic jewels’ be united to form an unsaleable treasure. 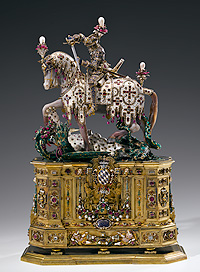 Established in this way by the Wittelsbach family's first great patron and collector of art, the treasure was expanded by his son, Duke Wilhelm V, and by his grandson, Elector Maximilian I, and was maintained by Electors Maximilian Emanuel, Karl Albrecht und Maximilian Joseph III. Elector Karl Theodor enlarged the treasure in the late 18th century by transferring the treasure of the Palatine Wittelsbachs to Munich.

The treasure reached its full extent in the early 19th century, with the addition of the royal insignia of the newly created Kingdom of Bavaria and of several outstanding medieval works of art acquired as a result of the confiscation of church property in 1803.

Alongside this profane treasure the Munich Residence also possessed valuable liturgical implements and relics (housed in containers known as reliquaries). This sacred treasure had been acquired in the early 17th century by Wilhelm V and Maximilian I for the Court Chapel in the Residence. Like the profane treasure, it was maintained by successive Wittelsbach rulers and expanded in the early 19th century by examples of the medieval goldsmith's art confiscated from the Church. Some works in this collection were transferred to the Treasury in 1958.

The Treasury in its present form is located in ten rooms on the ground floor of the Royal Palace.

Bus to 'Odeonsplatz',
tram to 'Nationaltheater'