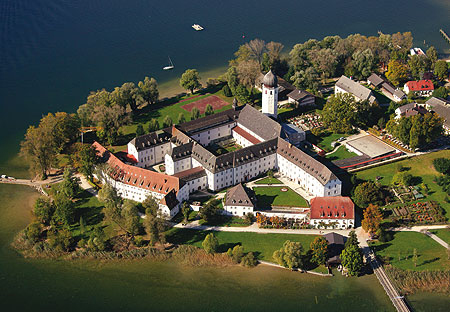 Frauenchiemsee Monastery was founded by Duke Tassilo, and the monastery church was consecrated in 782 by Bishop Virgil of Salzburg. In 788 the monastery came into the possession of Charles the Great, and passed from him to his grandson Ludwig the German. After the Hungarian invasions, the monastery flourished for a long period from the 11th to the 15th centuries.

In 1728-1732 the complex, by then in a poor state of repair, was finally rebuilt. After secularization it had a second founder in the person of King Ludwig I, who was responsible for the re-establishment of the monastery in 1837.

The foundations of the church, and possibly also parts of the walls, probably originate from the Carolingian era. What is certain, however, is that the present church was already in existence in the 11th century. In the 12th and 13th centuries it was extended and rebuilt. The appearance of the interior was significantly altered by the addition of a ribbed vault in 1468-1476, and the baroque altars were added in 1688-1702.

During restoration of the interior in 1928, Romanesque frescoes were discovered in the ambulatory, and in 1961 further frescoes from the 12th century were found in the present attic of the church. The bell tower in front of the northwest side of the church, became the symbol of the Chiemgau. The two lower floors of this eight-sided tower probably date from the 12th century, while the upper one was added in 1395. The tower acquired its characteristic onion dome in 1626. It was not part of the original monastery complex, but was built on the foundations of what was probably a Carolingian building.

Only the church and the gateway building can be visited. The monastery itself is not open to  the public.

The main entrance of the monastery church is not suitable for wheel chairs, but if you call the monastery gate (08054 907-0) the nuns will open another entrance for you. The paths on Frauenchiemsee island are accessible for wheelchair users.

Regular boats from Prien or Gstadt