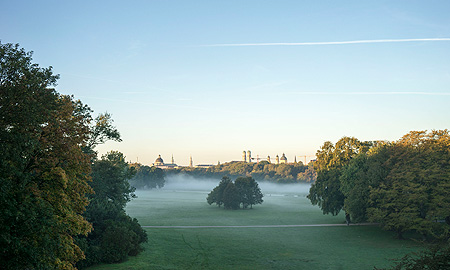 The English Garden is one of the largest inner-city parks in the world. With a length of five-and-a-half kilometres it forms a unique link between the natural landscape along the River Isar and the old city centre of Munich. Friedrich Ludwig von Sckell, the main creator of the English Garden, commented on his work with the words ‘Nature only creates a picture by accident, art does it intentionally’. Although the ‘nature’ here has been designed and planned down to the last detail, the English Garden looks very natural to those who use it, and not at all like a city park. 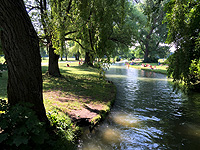 Brook in the English Garden

When Elector Karl Theodor ordered the English Garden to be laid out in 1789, he decreed that it was ‘not to be just for one section of society but for the whole population’. The idea for this decision of such huge benefit to Munich came from the American-born Sir Benjamin Thompson, who later became Count Rumford. In August 1789 the Schwetzingen court gardener Sckell was summoned to Munich to ‘discuss and help create’ a planned public park. The reason that it was laid out so quickly was possibly the social unrest that had led to the storming of the Bastille in Paris.

The area designated for the English Garden was a flood plain where willows and prickly sea buckthorn grew. A dam first had to be constructed to prevent further flooding. The area’s transformation into a park under Rumford’s direction was an achievement that cannot be overestimated. In a very short time paths were laid out, trees and bushes planted, bridges constructed and buildings such as the Chinese Tower and Rumford Hall erected (both in 1790).

In the year 1800, under Rumford’s successor Baron von Werneck, another 100 hectares of park were added in the north, the so-called ‘Hirschau’. The Kleinhesseloher See (Kleinhesseloher Lake) was created from 1804. During this period Friedrich Ludwig von Sckell had only a limited influence on the park’s development. It was not until he moved in 1804 from Schwetzingen to Munich after his appointment as Bavarian court garden superintendent that the final touches were added to the English Garden to make it one of the most outstanding examples of 19th-century garden design. Many of the paths were altered, plantings were improved and waterways completed. One of the symbols of the English Garden, the Monopteros temple, was only added after Friedrich Ludwig von Sckell’s death. It was designed by the architect Leo von Klenze in 1837 and sited on an artificial hill built and modelled by Carl August Sckell.

The barn is suitable for private celebrations such as birthdays, weddings, anniversaries, etc. up to 200 persons.

The orangery is suitable only for art exhibitions.

Historic children's merry-go-round at the Chinese Tower
April to October: in good weather daily from 2 pm

Coach trips through the English Garden