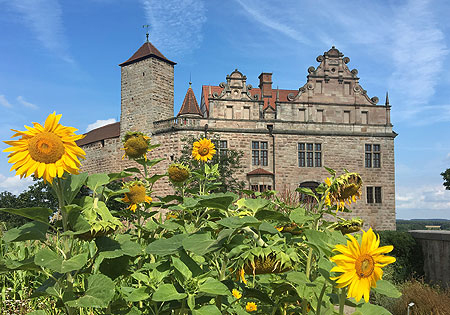 ‘Cadolzburg’ was first mentioned in a document in 1157. In the mid- 13th century it was acquired by the burgraves of Nuremberg from the (Hohen-)Zollern family who rebuilt it; only the so-called crypt, which is probably from the previous 12th-century building, is older. During the following centuries the castle was extended to create a prestigious complex. When in the 14th/15th centuries the Hohenzollerns came into conflict with the city of Nuremberg, the ambitious rulers of Franconia made Cadolzburg their seat of government. After the court was relocated, the castle continued as an important administrative centre of the Brandenburg-Ansbach margraviate until the end of the 18th century.

At the end of the Second World War the castle went up in flames. A few decades ago the Bavarian Palace Administration began to restore it, first securing the rock on which it stood and the building substance. The opening of the museum marked the completion of the conversion of the Old Palace that was commenced in 2005.

The museum: ‘A castle and its lords.
The Cadolzburg experience’

Exhibition “A castle and its lords. The Cadolzburg experience”

With an exhibition area of around 1,500 m², Cadolzburg has become an attractive castle museum. It is designed to provide an entertaining and informative encounter with the late medieval period that was the golden age of Cadolzburg. This period is not always so remote, grey and unapproachable as many people think! Here you can admire splendid outfits and quotes from the princes, have fun playing unique history games and experience impressive media installations.

The exhibition of course also includes numerous original objects and elaborate reproductions. It describes everyday topics such as cooking, sleeping, the composition and timetable of the court, legal relationships, politics, communication and representation, as well as war in the period when firearms were first introduced, hunting, dancing and tournaments.

In addition, the building itself can tell numerous stories of its own about its various usages and eras. A multimedia guide, finally, gives visitors the opportunity to take an individualized tour of the exhibition by means of additional explanations, forms of presentation and in-depth information. Here contemporary museum resources enable visitors to experience for themselves what it was like to live in a 15th-century princes’ castle.

The Oriel Hall and Oak Pillar Hall are suitable for receptions, concerts, lectures and banquets up to 150 persons.

The New Palace is suitable for receptions and concerts up to 390 persons.

Cadolzburg
www.bahn.com
(20-minute walk from the station to the castle)

'Höhbuck' (10-minute walk to the castle)