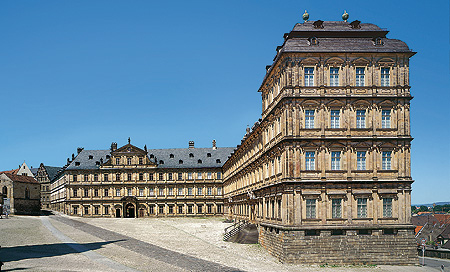 The Bamberg cathedral square is surrounded by three impressive buildings documenting over a thousand years of town history: the cathedral, the Old Court and the New Residence. Emperor Heinrich II made the Old Court the seat of the first Bamberg bishop in 1007. The half-timbered buildings at the back were begun in 1475 and the buildings in the Renaissance style on the cathedral square – the Council Chamber Building (Ratsstubenbau) and Beautiful Gate (Schöne Pforte) – were begun in 1568. These buildings maintained by the Bavarian Palace Administration house the Historical Museum of the city of Bamberg.

The life-style and status of the prince-bishops is illustrated by the New Residence with its magnificent façades on the opposite side of the cathedral square. The two baroque wings were built from 1697 to 1703 under Prince-Bishop Lothar Franz von Schönborn from plans by Leonhard Dientzenhofer. They were preceded by the two Renaissance wings at the rear with arcades on the inner courtyard side, which were built from 1604 to 1612. The New Residence was the first large palace to be built in Franconia in the age of absolutism. Until 1802 it was the seat of the Bamberg prince-bishops, who were not only heads of the church, but were also the secular rulers of the region.

The magnificent interior has retained the authentic atmosphere of a princely residence. One of the highlights is the Imperial Hall on the second floor. The Tyrolean-born painter Melchior Steidl decorated it from 1707 to 1709 with 16 larger than life-size portraits of emperors and allegories of the four world empires and the ‘Good Regiment’. In addition to the Bavarian Palace Administration’s period rooms in the New Residence, the ‘Old German Gallery’ and the ‘Baroque Gallery’ which are part of the Bavarian State Collection of Paintings, are well worth a visit. Visitors can relax afterwards in the Rose Garden with its café and magnificent view over Bamberg.

The Imperial Hall is suitable for concerts and ceremonies up to 300 persons.

We are sorry that, due to renovation work, the Elector's Apartment cannot be visited until further notice.

Guided tours of the Prince-Bishop's Apartment take place regularly (in German; every half hour during opening hours). The other rooms can be visited without a guided tour.

No own car park