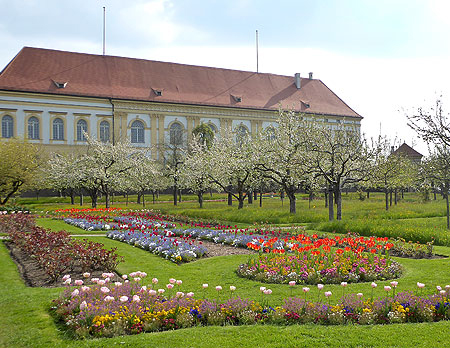 Dachau Palace originated as a high medieval castle belonging to the Counts of Dachau. In the 16th century it became the favourite country residence of the Munich court: from 1546 on, during the reigns of Duke Wilhelm IV and Duke Albrecht V, it was transformed into a massive four-wing palace complex. The banqueting hall is accommodated in the tract facing the court gardens. 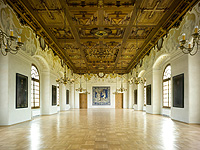 An outstanding feature of this hall is the coffered ceiling, which was created by the Munich artist Hans Wisreutter from 1564 to 1566. The Renaissance ceiling is one of the most important of its kind in southern Germany. Its rich decorations include the coat of arms of the Wittelsbach patrons and their wives. Under Elector Max Emanuel the hall tract and the magnificent staircase were redesigned in the baroque style by Joseph Effner from 1715 to 1717.

At the beginning of the 19th century, three-quarters of the complex was pulled down. Only the redesigned hall tract remained. Old garden walls, an almost 280-year-old linden pergola, an orchard and a small woodland area in which various amusements (bowling alley, swing etc.) were originally installed, reflect the successive epochs of garden design. The garden is particularly attractive through its position on a high ridge at the edge of a hilly region formed in the Tertiary period.

The banqueting hall is suitable for concerts, receptions, banquets and lectures up to 585 persons.

In this virtual tour you will experience the Dachau Palace and Court Garden from a brand new perspective. The Panoramic shots (360 degrees) will present you phantastic views of the palace and the gardens. Please click on the picture below to start the virtual tour:

April-September: 9 am-6 pm
October-March: 10 am-4 pm
closed Mondays
(The opening hours of the café/ restaurant can be found on its website.)

Tickets for Dachau Palace are available in the café (if closed, please ring the bell).

Lift available, please inquire at the cash-desk; access to the court garden via ramp

Few car and bus parking spaces available in front of the palace; public parking in Dachau's historic center and at the multi-storey car park "Wieningerstraße"