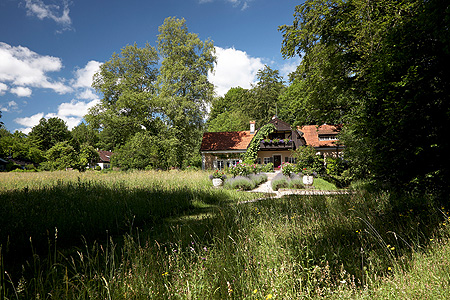 The garden was primarily laid out by Anna Sophie Gasteiger (1877-1954), who used the formal flower garden running from west to east near the villa (Mathias and Anna Sophie Gasteiger's House) as the inspiration for her still-life paintings of flowers. Many of these, painted against the light, were produced in the atelier by the east gable window, which has a view of the Ammersee. 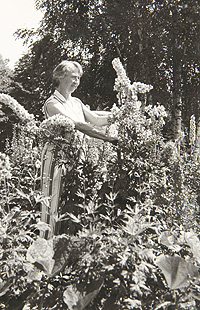 Anna Gasteiger in her garden

Mathias Gasteiger also used the landscape park as an open-air extension of his atelier, exhibiting his sculptures there and decorating essential features such as the entrance gate and the bridges over the Kittenbach which flows through the grounds. The entrance on the Eduard-Thöny-Strasse is particularly elaborate, with groups of deer in cast stone flanking the two pillars on either side of the wooden gates; the same sculptures can be found on the Diana Fountain on Kufsteiner Platz in Munich.

Today the grounds are divided into two parts; the northern part is open to the public as a lawn for sunbathing with access to the lake.

from Munich to Herrsching

From Herrsching to Holzhausen
www.seenschifffahrt.de