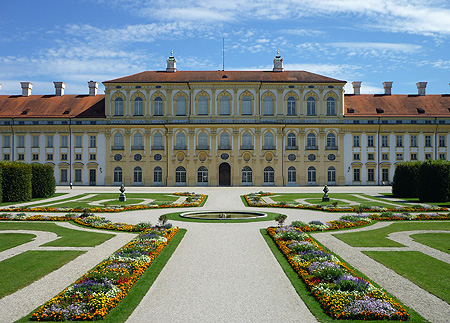 The palace complex of Schleissheim is among the largest and most impressive of the Wittelsbach dynasty’s residences in Bavaria. The Old Palace originated in the early 17th century as a ducal country mansion. The Baroque palace buildings, the monumental New Palace and the hunting lodge of Lustheim were built by Elector Max Emanuel (r. 1680-1726). They enclose one of Europe’s most important Baroque gardens with a canal system, which the Elector had laid out by French garden designers.

At the height of his career in the 1690s, Max Emanuel and his court architect, Henrico Zuccalli, began planning the construction of a new, extremely ambitious residential palace in Schleissheim. As an extensive fourwinged complex, it was intended to incorporate the Old Palace built by his ancestors. However, following military defeats and a period of exile in France in 1704-1715, Max Emanuel had to make do with constructing the single-winged New Palace.

Despite this, one of the most impressive Baroque palaces in Europe was created. The shell of the building was erected in 1701-1704. The façade and interior decoration were designed starting in 1719 – using the most fashionable late Baroque style from France – by the new court architect, Joseph Effner, who had been trained in Paris. The New Palace had only just been completed when the Elector died in 1726. 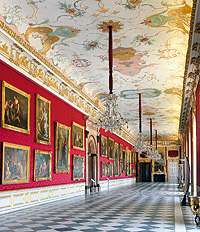 The decorations and fittings in the banqueting halls and prestige suites, featuring works by major artists, are of high art-historical standing. The ceiling frescos were painted by a Venetian, Jacopo Amigoni, and by the Bavarian artist Cosmas Damian Asam; the stucco decorations are by Johann Baptist Zimmermann. With its precious decorations and furnishings, the impressive sequence of ceremonial rooms – consisting of the Grand Stairway, Banqueting Hall, Hall of Victories and Great Gallery, along with the state apartments of the Electoral couple – is even today among the most important examples of interior decoration in Baroque palace architecture.

Masterpieces of European Baroque painting held by the Bavarian State Painting Collections are on exhibition in the Palace’s state rooms.

St Maximilian's Chapel is suitable for concerts, religious services and weddings up to 75 persons.

The Great Hall is suitable for concerts, ceremonies etc. up to 432 persons.

The sala terrena is suitable for receptions and banquetsup to 700 persons.

The dining hall is suitable for civil weddings and small concerts up to 120 persons.

Audioguide available in German, English, Italian and French (with costs)