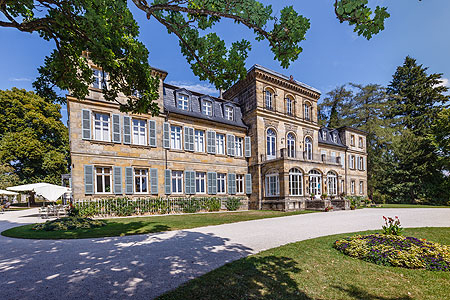 In 1761, three years after the death of his wife Wilhelmine, Margrave Friedrich started to build a palace in Donndorf but did not live to see it completed. His daughter Elisabeth Friederike Sophie received the property in 1763 and named it ‘Fantaisie’. Under her direction the palace was finished and by 1780 also a late baroque garden. The pavilion, the cascade and the Neptune Fountain have remained from this period. From 1793 Friederike Dorothee Sophie von Württemberg extended the gardens in the sentimental landscape style and added a catacomb and the pillar of harmony. From 1839 to 1881 Duke Alexander von Württemberg rebuilt the palace and extended the park to give it its present form, with landscape sections, sculptures, fountains and terraces.

Since 2000 Fantaisie Palace has been the location of the first garden museum in Germany. With numerous valuable exhibits it illustrates the history of garden design from the 17th to the 19th century. The museum tour includes the White Hall and the reconstructed Spindler Cabinet with its elaborate marquetry.

The attractive palace park has original design elements from the three relevant phases of development in the Rococo, the sentimental landscape and the mixed styles, and is as important a historic record as the palace itself. A visit to the Fantaisie garden museum is not complete without a walk through the park with its numerous buildings and monuments

The vestibule is suitable for all kinds of receptions, banquets and concerts up to 50 persons.

The White Hall is suitable for concerts and lectures up to 100 persons.

The garden pavilion is suitable for exhibitions and civil weddings up to 60 persons.

May-October 9 am-6 pm every hour on the hour