Hall of Fame and Statue of Bavaria – Munich 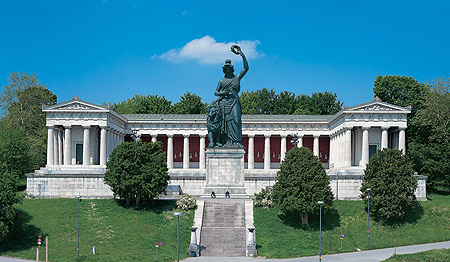 King Ludwig I had the Hall of Fame built from 1843 to 1853 above the Theresienwiese ‘to acknowledge fame and service to Bavaria’. The architect Leo von Klenze based the three-winged columned hall on ancient colossal altars. It contained the busts of Bavarian personalities whom the king felt had rendered outstanding service to their country, science and art. The Hall of Fame was badly damaged during the Second World War and rebuilt from 1965 to 1972.

In 1966 the Council of Ministers of the Free State of Bavaria decided not to keep it solely as a museum but to continue to install busts in honour of personalities from Bavaria who had served the people and state. 25 busts have now been added to the 67 remaining from the 19th century. Since 2000 these have included the first two women: the author Lena Christ and the actress Clara Ziegler.

At the time the bronze cast of the Bavaria was considered a technical masterpiece. The bronze figure of the Bavaria in front of the Hall of Fame, a personification of the state, was made from a model by the sculptor Ludwig Schwanthaler. The cast of the 1,560 hundredweight bronze was completed in 1850. Ferdinand von Miller, the then director of the royal foundry, was greatly admired by his contemporaries for his achievement. The monumental statue was based on the colossi and cult images of antiquity. With the simple dress and bearskin, Schwanthaler however gave the figure unmistakable Old Germanic characteristics. The Bavaria, the first colossal sculpture of the Modern Age, stands on a pedestal 8.92 metres high and measures a total of 18.52 metres from the feet to the wreath of oak leaves. It is the only large bronze in Germany with an accessible interior. A steep winding staircase leads up through the hollow statue to a viewing platform in the head, where there are two benches with room for six people. Through the various small openings there is an excellent view of the Oktoberfest that takes place every year at the foot of the Bavaria.

During the Oktoberfest the Bavaria is open until 8 pm, the Hall of Fame is closed for safety reasons.

From 9 October to end of March the Hall of Fame and the Statue of Bavaria are closed.

Guided tours for private groups can be booked here …

Only accessible via staircase

Car park 'Theresienwiese' (except during the Oktoberfest)