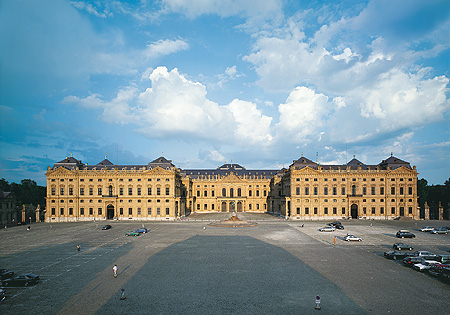 The former residence of the Würzburg prince-bishops is one of the most important baroque palaces in Europe and today it is on UNESCO's World Heritage list. Originally designed for Prince-Bishop Johann Philipp Franz von Schönborn by the then young and unknown architect Balthasar Neumann, it took sixty years to complete; the shell of the palace was built from 1720 to 1744 and the interior finished in 1780. 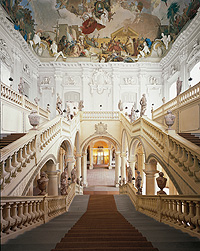 Neumann's world-famous staircase, roofed by an unsupported vault, was decorated in 1752/53 by the Venetian Giovanni Battista Tiepolo with a ceiling fresco representing the four continents. The painting, measuring 18 x 30 metres, is one of the largest frescos ever created. The magnificent sequence of rooms begins with the vestibule and Garden Hall and continues via the staircase and White Hall to the Imperial Hall, also with frescos by Tiepolo. The vaulting of these rooms even withstood the devastating fire of 1945, while the ceilings and floors of the Imperial Apartments flanking the Imperial Hall were destroyed. The furnishings and wall panelling had been removed beforehand, enabling the rooms to be reconstructed.

Restoration was completed in 1987 with the reopening of the Mirror Cabinet. There is a total of over 40 palace rooms to visit, with a rich array of furniture, tapestries, paintings and other 18th centuriy treasures.

The State Gallery contains Venetian art from the 17th and 18th centuries (Branch of the Bavarian State Galleries).

The Court Chapel, entered separately from the southern front yard, is one of the finest examples of religious art in Würzburg.

Further information and tips for visitors can be found at
www.residenz-wuerzburg.de

The Prince's Hall is suitable for concerts, lectures, receptions and banquets up to 300 persons.

The kitchen is suitable for food warming.

The vestibule is suitable for receptions up to 300 persons.

The Garden Hall is suitable for concerts, lectures, ceremonies, receptions and banquets up to 450 persons.

The kitchen is suitable for food warming.

The Imperial Hall is suitable for concerts, lectures and ceremonies up to 400 persons.

The White Hall is suitable for concerts up to 324 persons.

The court chapel is suitable for concerts, weddings and religious services up to 160 persons.

Visit only with a guided tour; last guided tour in German 1 hour before closing time
Tours in English at 11 am and 3 pm