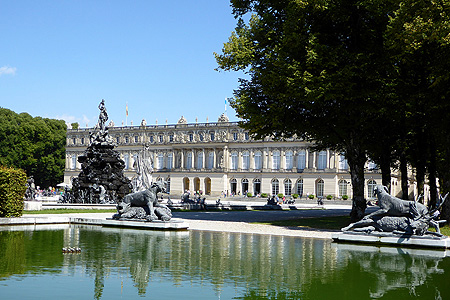 King Ludwig II’s original idea was to have a copy of Versailles Palace built on the Herreninsel as a "Temple of Fame" in honour of the Sun King Louis XIV of France. Started in 1878, it was thus intended purely as a monument to absolute monarchy and had no practical function. The architect Georg Dollmann was obliged to study the original model and even reconstruct rooms which had long ceased to exist in Versailles. 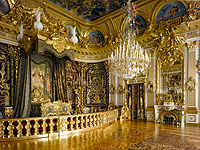 The main rooms are some of the best examples of nineteenth-century interior design in existence, and are much more splendidly furnished than those in Versailles. No other porcelain collection is so comprehensive or of such high quality, and the magnificent textiles are equally unique. One of the artistic ideals of the nineteenth century, the "perfection" of historic styles, was realised in its finest form in this building.

The park modelled on Versailles by Carl von Effner was originally intended to cover a large part of the island. When Ludwig II died in 1886, only the central axis with its splendid fountains was carried out. The palace remained uncompleted.

The museum is housed in twelve modernized rooms on the ground floor of the south wing and was opened in 1987. It documents the story of Ludwig II’s life, from his birth to his tragic early death, with painted portraits, busts, historic photographs and original state robes. 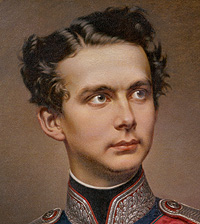 The king also has a place in the history of music as the patron of the composer Richard Wagner. Portraits, written documents and theatre/stage designs record this aspect of his life.

The royal residences of Neuschwanstein Castle, Linderhof Palace and Herrenchiemsee Palace as well as Ludwig II’s other building projects are also covered. Highlights of the museum include the magnificent furniture that originally stood in the royal apartment in the Munich Residence (destroyed during the Second World War) and the first state bedroom in Linderhof Palace.

Elaborately handcrafted items, show-pieces that were commissioned by the king, document the European standing of Munich art in the second half of the nineteenth century.


The following rooms are available for your events:

The unfinished rooms are suitable for exhibitions, conferences, concerts, lectures, receptions and banquets (only company events) up to 500 persons.

The unfinished rooms are suitable for exhibitions, conferences, concerts, lectures, receptions and banquets (only company events) up to 500 persons.

You can only visit Herrenchiemsee New Palace on a guided tour (currently reduced group size).

The King Ludwig II-Museum can be visited without a guided tour.

"Königsschlösser"
combination ticket
(King Ludwig II's palaces)
31 euros
The combination ticket is valid for six months; you can visit each of the palaces Herrenchiemsee, Linderhof, and Neuschwanstein once.