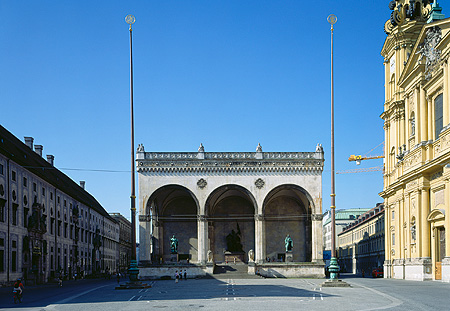 The Field Marshals' Hall, which was modelled on the "Loggia dei Lanzi" in Florence, was commissioned by King Ludwig I to honour the Bavarian army and its victorious generals. It was designed by Friedrich von Gärtner and built from 1841 to 1844.

The bronze statues of Count Tilly and Prince Wrede were sculpted by Ludwig von Schwanthaler and cast from melted-down cannons. The "army monument" in the centre of the hall was added in 1892 by Prince Regent Luitpold. This monumental bronze group created by Ferdinand von Miller the Younger commemorates the German-French war in 1870/71. The marble lions flanking the steps are the work of Wilhelm Ruemann and date from 1905.

When the National Socialists came to power in 1933, the Field Marshals' Hall became a symbol of the ‘movement’: on 9 November 1923 National Socialist rebels, whose aim was to overthrow democracy, were marching towards the Ministry of War and were stopped here by the Bavarian police. There were deaths and injuries on both sides. A memorial designed by Paul Ludwig Troost was installed in the hall in 1933 to commemorate the dead putschists, and the regular ‘memorial ceremonies’ served to demonstrate the might of the regime. In 1945 the memorial was removed. Today a bronze plaque on the neighbouring façade of the Residence commemorates the four Bavarian policemen who died thwarting the attempted coup in 1923.

Interior only accessible via a flight of steps

Bus to "Odeonsplatz",
tram to "Nationaltheater"