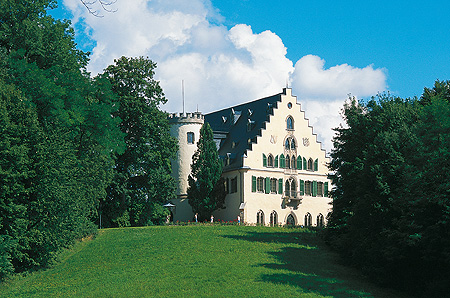 Rosenau Palace is picturesquely set in a romantic English landscape garden northeast of Coburg. In 1805 Duke Franz Friedrich Anton von Sachsen-Coburg-Saalfeld was persuaded by his son and heir Ernst to acquire the seat of the Lords of Rosenau, which dated back to the Middle Ages. After he took over the government, from 1808 to 1817 the new duke had the ruined building reconstructed in the neo-Gothic style. He wanted to create for himself a summer seat with particular emphasis on the building’s medieval origins, in accordance with the romantic ideals of his time. The first ideas for the pointed arch architecture and tracery ornamentation were suggested by the young architect Karl Friedrich von Schinkel. The completion of Rosenau Palace was celebrated in 1817 on the occasion of the wedding of Duke Ernst III von Sachsen-Coburg-Saalfeld (from 1826 Ernst I von Sachsen-Coburg und Gotha) and Luise von SachsenGotha-Altenburg with a knights’ tournament ‘in Old German costume ’ on the meadows in front of the palace as well as fancy-dress balls in the Marble Hall.

The living rooms and assembly rooms in Rosenau Palace are dominated by brightly coloured wall paintings in the neo-Gothic style and the original black-stained, polished Viennese Biedermeier furniture. The bright, comfortably furnished rooms reflect the duke’s wish to combine ‘princely splendour with rural simplicity ’. In the year 1845 Prince Albert, the second son of Duke Ernst I who was born at Rosenau, visited the palace together with his wife, Queen Victoria of the United Kingdom of Great Britain and Ireland. ‘If I were not who I am ’, wrote the queen in her memoires, ‘my real home would be here ’.

The park surrounding the palace, in which aspects of the classical English landscape garden are combined with typical romantic elements, dates back to Duke Ernst I. Of the once numerous park buildings the neo-Gothic farm building, a grotto with a waterfall and a tournament column have been preserved. The neoclassical tea house is today used as the park restaurant, and the orangery houses a museum of modern glass. The viewing terrace is particularly attractive with its flower parterre, fountain and balustrade, and a splendid view of the Itztal.

The Marble Hall is suitable for concerts, ceremonies and civil weddings up to 120 persons.

The Old Orangery is suitable for banquets, ceremonies, receptions, concerts and private parties up to 200 persons.

A visit is only possible with a guided tour; guided tours (in German) start every hour on the hour.

Rödental
www.bahn.com
(30-minute walk from the station to the castle)

Shop with cafeteria (self service)
www.kulturgut.de