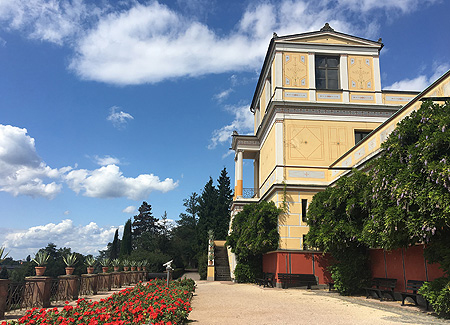 In the palace garden on the high bank of the River Main is the Pompeiianum. Inspired by the excavations in Pompeii, King Ludwig I of Bavaria commissioned the architect Friedrich von Gärtner to build an idealized Roman villa, which was completed from 1840 to 1848 – not for himself but as a place where art lovers could make a study of ancient culture in their own country.

Triclinium of the summer

On the ground floor are the reception and guest rooms, the kitchen and the dining room, grouped around two inner courtyards, the Atrium with its water basin and the Viridarium with its garden in the rear section of the house. The splendid decoration of the interior and the mosaic floors were copied or adapted from ancient models.

After severe damage in the Second World War, the Pompeiianum was restored in several stages, beginning in 1960. Since 1994, original Roman works of art from the State Antiquities Collections and the Glyptothek in Munich are now also on display here. Among the most valuable exhibits in addition to the Roman marble sculptures, small bronzes and glasses, are two marble thrones of gods. In addition, there is a different special exhibtion every year on an archaeological topic. The Pompeiianum is surrounded by a small garden which was also only laid out in the mid-19th century. It was to be an ‘ideal Mediterranean landscape’, and still has a flavour of the warmer climes of southern Europe with its fig, araucaria and almond trees, as well as vines, Lombardy poplars and pines.

Main rooms on the ground floor, 1st floor only accessible via staircase