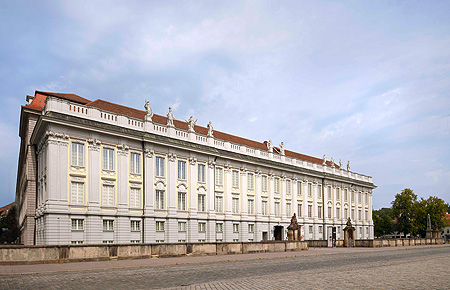 The Residence of Ansbach originated as a medieval complex. The large Gothic Hall with its ribbed vault, in which the largest collection of faience and porcelain from the former Ansbach Manufactory is now on display, was built in the late 16th century. The medieval complex was redesigned as a modern residence between 1705 and 1730. 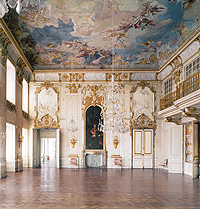 The Ansbach Residence is primarily famous for its outstanding interiors, most of which were designed by the architect Leopoldo Retti and completed between 1734 and 1745. It is no accident that the furnishings are so well preserved and stylistically consistent: in 1791 the last margrave of Brandenburg-Ansbach abdicated and handed over his lands to the kingdom of Prussia. The palace was now no longer the seat of the ruler and there was seldom cause to modernize the state apartments.

The main floor of the Ansbach Residence consists of three suites of rooms which were used separately for official ceremonies: the Margrave’s Apartment, the Margavine’s Apartment and the Guest Apartment. Particular highlights of the palace are the ceiling fresco by Carlo Carlone in the Festival Hall, the art gallery with works of art from the rococo period and paintings from the former margravial gallery, and the collection of Meißen porcelain in the Mirror Cabinet.

A special rarity are the prepared margravial horses from the 18th century.

In the Court Garden opposite, which also features an orangery, is a splendid parterre with summer flowers and numerous tub plants, as well as a medicinal herb garden.

Video about the Ansbach Residence

The Gothic Hall is suitable for receptions, exhibitions and lectures

Further rooms are available in the court garden:

The orangery is suitable for banquets, concerts and receptions up to 1.088 persons.

The Dome Hall of the orangery is suitable for banquets and receptions up to 300 persons.

The foyer of the orangery is suitable for receptions and small exhibitions up to 200 persons.

The Citrus House is suitable for weddings and exhibitions up to 70 persons.

The Festival Hall (Carlonesaal) is currently being renovated and will probably not be open to the public without scaffolding until 2025. Due to the renovation of the façade, there will also be disruptions in the rooms of the margravial apartments. We ask for your understanding.

Visit only possible with a guided tour; start of the tour every hour on the hour

Lift available, please inquire at the cash-desk; toilet for the disabled available