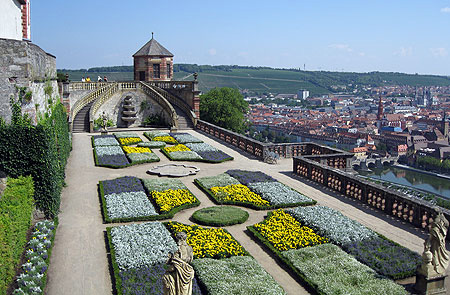 The Princes' Garden on the "Schütt" in front of the east side of the Marienberg Fortress where the battery originally stood, has probably been in existence as a garden since the early 16th century. The style of the artistic terraces and magnificent balustrades, and probably also the two cascades on the narrow sides, places them in the time of Prince-Bishop Johann Philipp von Schönborn (1642-1673); this is also supported by the Schönborn coat of arms on the balustrade of the garden terrace balcony.

The garden did not acquire its present form (restored in 1937) until around 1700, under Johann Philipp von Greiffenclau, who also renovated the interiors of the episcopal apartment and the church on the Marienberg. The parterre, with eight sections and a fountain, originally had four allegorical mythological figures, possibly symbols of the four seasons. Two of the original sculptures, all destroyed, were replaced with copies. The two garden pavilions on the upper terraces, probably the work of Josef Greising, also date from around 1700. The southern pavilion still has its rich, late baroque stucco decoration.

In 1937/38 the garden parterre was restored on the basis of fortress plans dating from the early 18th century to its original eight-part form with the fountain. From the Princes' Garden there is a magnificent view of Würzburg and the valley of the River Main as far as Randersacker, and the Nikolausberg with the Käppele.

Difficult because of steep paths and steps; accessible only in small parts

Bus to 'Festung'
(April-October only)
www.wvv.de