Hall of Liberation at Kelheim 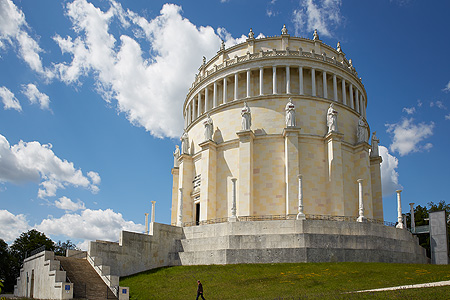 The impressive rotunda of the Hall of Liberation, situated on the Michelsberg in Kelheim, southwest of Regensburg, dominates the surrounding countryside. King Ludwig I commissioned the construction of this monument to commemorate both the victorious battles against Napoleon during the Wars of Liberation 1813–1815 and the unification of all the German races. The Hall of Liberation is one of a series of monuments – the Feldherrnhalle (Field Marshals' Hall), the Siegestor (Gate of Victory) and the Ruhmeshalle (Hall of Fame) with the Statue of Bavaria in Munich as well as the Walhalla in Regensburg – which were built for the glorification of Bavaria and the German nation.

The architect first chosen to design the Hall of Liberation was Friedrich von Gärtner, who began work on it in 1842, modelling it on centrally planned buildings from ancient Rome and medieval Italy. In 1847, after only the foundation walls and two of the large steps at the base had been completed, building came to a temporary halt with the sudden death of Gärtner. He was succeeded by Leo von Klenze, King Ludwig I’s favourite architect and one of the most important German neoclassical architects in Germany, whose works (Alte Pinakothek, Ludwigstraße) dominated Munich in the 19th century. Klenze redesigned the Hall of Liberation in a style that reflects both the elegant proportions of ancient temples and the fortified characteristics of medieval towers or temples of the Holy Grail.

The inauguration ceremony took place on 18 October 1863, the 50th anniversary of the Battle of the Nations near Leipzig. The Hall of Liberation is built in the shape of an eighteen-sided polygon. The massive supporting buttresses of the façade are crowned by eighteen monumental statues – allegories of the German tribes. The 5.80 m statues were designed by the sculptor Johann Halbig and are made of Danube limestone. The number eighteen also stands for the date of the Battle of the Nations, 18 October 1813, when Napoleon’s forces were crushed by the coalition near Leipzig. 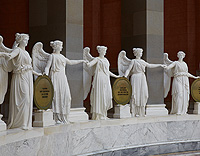 The interior is dominated by 34 Goddesses of Victory made of white marble, mounted with linked hands on an encircling base. The statues were designed by Ludwig Schwanthaler and symbolise the thirty-four German states of the German Confederation (Deutscher Bund), which was founded in 1815. The coffered ceiling of the 45-metre-high domed hall and the divisions created by the alcoves, arcades and galleries give the room extra-ordinary acoustics, which combine with the architecture and the light, festive colours of the interior to create an appropriately ceremonious atmosphere.

In this virtual tour you will experience the Hall of Liberation at Kelheim from a brand new perspective. The Panoramic shots (360 degrees) will present you phantastic views of the palace and the gardens. Please click on the picture below to start the virtual tour:

On weekends and on days when there is no school, there will be a shuttle bus that starts at the boat landing stage in Kelheim.

7 November-end of December:
Only on weekends and on days when there is no school: 10 am-4 pm

No dogs or other animals may be taken into the Hall of Liberation.