Short description of the : 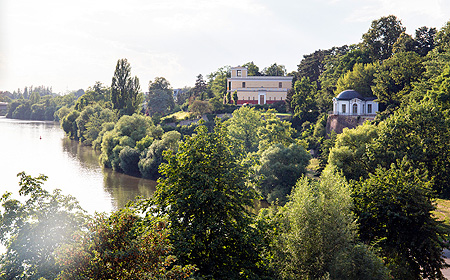 When the town fortifications were no longer needed, the moat and the ramparts along the banks of the River Main near Johannisburg Palace were converted into vineyards, fruit and vegetable gardens. In 1782, Emanuel d'Herigoyen built the Frühstückstempel (Breakfast Temple), a pavilion picturesquely located on a rock high above the Main. Three years later the Archbishop and Elector of Mainz, Friedrich Carl von Erthal, transformed the moat into a landscape garden. The arcade covered with climbing plants which connects the palace with the moat was built by d'Herigoyen on what remained of the town walls.

On the opposite side of the palace, a "chestnut wood" consisting of chestnut trees planted in straight rows was laid out to accompany the Kornhäuschen (Hall of Columns). 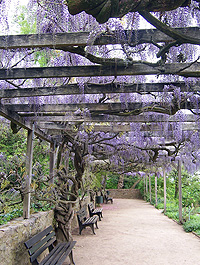 Climbing plants along the path to the Pompejanum

The Pompeiianum, built in 1843-48 from plans by Friedrich von Gärtner, was intended together with its grounds to represent a Mediterranean scene. As far as possible, Mediterranean plants such as figs and agaves were planted, but black pines were used instead of stone pines and Lombardy poplars instead of cypresses.

A vineyard, which was destroyed in the 2nd World War and reconstructed 1963, added the final touch to this southern European scene. In 1850 many additional varieties of tree were planted in the moat in the middle of the palace complex.

An idealized Mediterranean landscape was created with gardens and architectural features on the Main bank between the palace and the Pompeiianum. King Ludwig I was particularly fond of this spot and called it his "Bavarian Nice".

Difficult because of steep paths and steps

Car parks near the palace and in the Suicardstraße