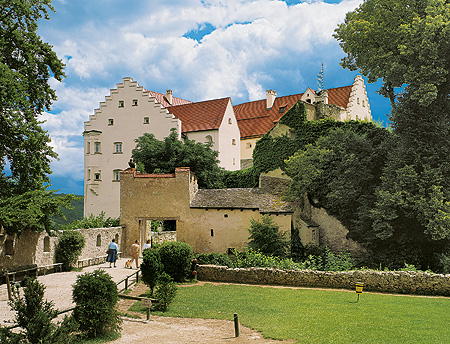 Rosenburg Castle, probably built in the middle of the 12th century, was acquired by the Dukes of Bavaria in 1196, and from then on remained in the hands of the House of Wittelsbach.

The core of this large complex is Romanesque; it was twice destroyed and rebuilt and in 1525 first acquired its present appearance, which is dominated by the residential building in South German Renaissance style with its crow-step gables. Among the highlights is the chapel on the ground floor with wall paintings dating from around 1560.

The castle is now used by a privately run falconry with a Museum of Hunting and Falconry; falconry demonstrations are held in the castle courtyard.

The falconry is not run by the Bavarian Palace Administration.

The castle and the restaurant can only be visited with a ticket for the falconry.

The annual season tickets and 14-day tickets of the Bavarian Palace Administration entitle the bearers to admittance only after the last falconry demonstration.

Only the castle courtyard and the restaurant are accessible for wheelchair users.