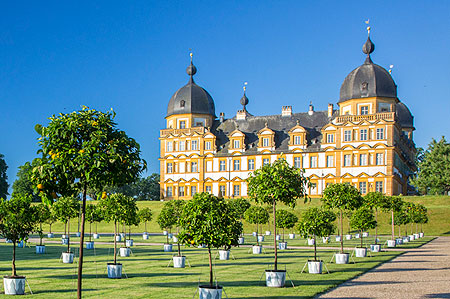 The prince-bishop’s summer residence north-east of Bamberg originated as a hunting lodge and country house dating from the end of the 15th century. The present four-winged complex with its striking corner towers, based on the Aschaffenburg palace, was begun in 1687 under the Bamberg Prince-Bishop Marquard Sebastian Schenk von Stauffenberg from plans by the architect Antonio Petrini from northern Italy. 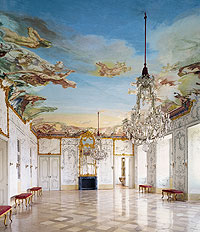 The building was completed by the end of the 18th century under von Stauffenberg’s successors, who also made certain alterations to the original design. Prince-Bishop Johann Philipp Anton von Franckenstein thus redesigned the White Hall in the west wing, also summoning the court painter of the Mainz electoral court, Giuseppe Appiani, to Bamberg in 1751 for the purpose. The artist, who also painted the ceiling frescoes of the nearby Vierzehnheiligen pilgrimage church, created a splendid ceiling painting depicting the heavenly paradise of the gods with allegories of hunting and other amusements at a prince-bishop’s residence. Today, after comprehensive renovation, nine of the former period rooms with their furnishings are open to the public.

It was during the reign of Prince-Bishop Adam Friedrich von Seinsheim (1757-1779) that the large cascade with the figure program by Ferdinand Tietz and the symmetrical flights of steps was created. The comprehensive restoration of the cascade was completed in 1995 and the waterworks are now operating almost exactly as they were over 200 years ago.

Among other things, the sculptures by Ferdinand Tietz, which can be admired in the garden and in the Tietz Museum in the Orangery, bear witness to the splendour of the former rococo garden.

The orangery is suitable for receptions, banquets and concerts up to 416 persons.

The palace chapel is suitable for secular marriage ceremonies up to 80 persons.

The room next to the palace chapel is suitable for civil weddings up to 40 persons.

In this virtual tour you will experience Seehof Palace and Park from a brand new perspective. The panoramic shots (360 degrees) will present you phantastic views of the palace and the gardens. Please click on the picture below to start the virtual tour:

You can only visit Seehof Palace with a guided tour.

For organisational reasons, we ask groups to register by phone or e-mail (see above). Many thanks

Please note that the façades of Seehof Palace are currently covered in scaffolding do to renovation works. We ask for your understanding.

Unfortunately, the water works are not in operation for the time being due to repair work.

Information sheet on Seehof Palace for people with a handicap