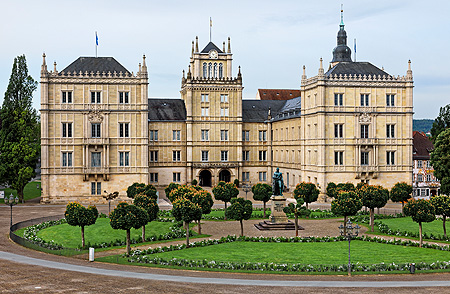 Ehrenburg Palace was built by the Coburg dukes in the 16th century as a representative town residence. The building, which was to be constructed on the site of a Franciscan monastery no longer in operation, was commissioned in the year 1543 by Johann Ernst von Sachsen-Coburg. Only five years later the duke was able to move his court from the fortress on the castle hill down into the town. Emperor Karl V is said to have given the complex with its three wings the name Ehrenburg (‘Palace of Honour’) because the building was completed without the use of compulsory labour.

In 1690, after a catastrophic fire, Duke Albrecht embarked on the transformation of the palace into a baroque residence. Rooms with lavish stucco-work by artists from Upper Italy, the court chapel and the Hall of Giants have been preserved from this period. The magnificent hall acquired its name from the 28 massive atlases supporting the beams of the ceiling.

Duke Ernst I (reigned 1806–1844) began to remodel Ehrenburg Palace in the contemporary style only a few years after he came to power. It was then that the building acquired its impressive neo-Gothic façade, designed by the architect Karl Friedrich von Schinkel and begun in 1810. For the interior André-Marie Renié-Grétry was summoned to Coburg from France. Between 1816 and 1840 the apartments were renovated in the French Empire style on the basis of his designs and filled with magnificent furniture, clocks, chandeliers and tapestries from major Paris manufactories.

Numerous portraits in the palace rooms and the bedroom of Queen Victoria, a frequent guest in Coburg, illustrate the far-reaching dynastic connections of the house of Sachsen-Coburg und Gotha, which rose in the 19th century to occupy a position of importance on a European scale by means of skilful marriage policy. Also of particular interest are two art galleries with works by Lucas Cranach the elder and Dutch and Flemish artists of the 16th and 17th centuries as well as romantic landscape paintings.

The Hall of Giants is suitable for concerts, ceremonies and lectures up to 400 persons.

The palace church is suitable for classical concerts, prayers and weddings up to 180 persons.

A visit is only possible with a guided tour; tours (in German) start every hour on the hour.

Car park 'Ketschenanger'" and multi-storey car parks in the centre

Waiting room with cafeteria (self service)