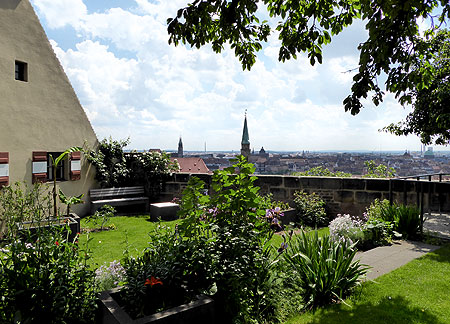 The Maria Sibylla Merian Garden is located between the Heathens‘ Tower and the Heavenly Stables. Within protecting walls a small garden idyll has been created, from which there is a splendid view of Nuremberg.

The garden is named after the famous artist and naturalist Maria Sibylla Merian (1647–1717), who lived and worked in Nuremberg for 14 years. She is one of the major personalities of the 17th and 18th centuries. The house where she lived was next to the Imperial Castle, and she was able to use this small garden for her flower and insect studies.

The area it occupies always functioned as a green space, although it was subject over the centuries to change and destruction. In 2013 it was redesigned as a modern garden. It is divided into an ungrassed area and a large lawn which emphasizes the garden character. Flowerbeds of various lengths extend from the edges into the lawn. The lower level also has a small fountain basin. The new materials in muted colours have been processed to blend in well with the historical surroundings. 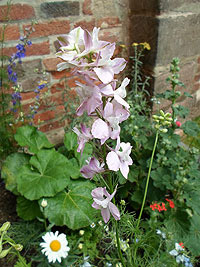 All the plants in the garden are taken from the books published by Maria Sibylla Merian and from her drawings. Even tropical plants from her South American expedition can be found here. The flower and herb beds are laid out according to themes: fragrant plants, decorative plants, plants and herbs that are tolerant of drought, plants from Surinam, native plants, defensive plants and annual plants. Since Maria Sibylla Merian ranks as the founder of modern insect research, in addition to plants that attract insects, a "living" plaque has been inserted into a niche in the garden wall which serves as an insect hotel for wild bees, beetles and other insects.

The Maria Sibylla Merian-Garten is a commemorative site for a famous citizen of Nuremberg in a historic setting. The exclusive, filigree garden area can be used for wedding receptions as part of the castle’s "Castle Wedding" project. The garden is also open to the public two days a week, but only to a limited extent because of the vulnerability of the lawn.

Shop in the Imperial Castle
www.kulturgut.de