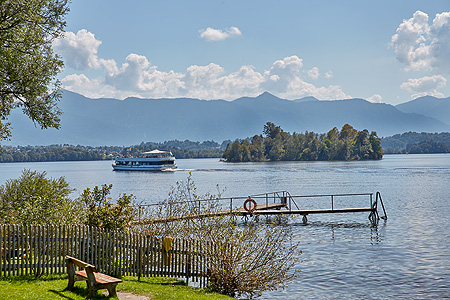 The countryside bordering the Staffelsee near Murnau is full of variety. This lake is just under eight square kilometres in area, and has a depth of up to 38 metres. With a total of seven, tree-covered islands, it has more islands than any of the other lakes in the Alpine foothills.

The attractive scenery of the Staffelsee area – described by Heinrich von Kleist as "a poet's dream", offers many opportunities for hiking. One of the numerous trails, 20 kilometres long, follows the shore of the lake.

The Staffelsee and Murnau were a source of inspiration for many artists, as documented in the Murnau home of Gabriele Münter and Wassily Kandinsky, which is now a museum.

The Staffelsee is approximately 65 km south of Munich and can be reached via the A95 motorway from Munich to Garmisch.

There is a connecting boat service from May until October.