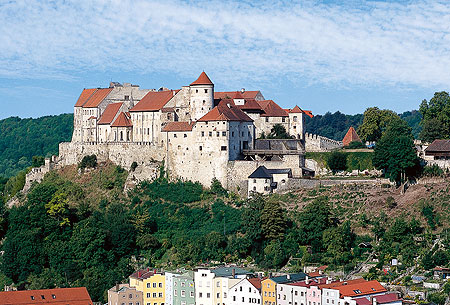 Burghausen Castle with a total length of a little over 1,000 metres is one of the longest castle complexes in Europe. It is picturesquely situated along a rocky spur between the Salzach river and Wöhrsee above the town of Burghausen. With its mighty towers and walls, ditches, bridges and gates enclosing many substantial buildings, it is still today an impressive monument to the art of castle building in the Middle Ages, and a demonstration of the power and importance of the Bavarian dukes. In 1180 the castle passed into the ownership of the dukes of Wittelsbach. For a quarter of a millennium – from 1255 to 1503 – it was the second residence of the dukes of Lower Bavaria, their main residence being in Landshut. It served as a court for the dukes’ consorts, a home for ducal widows, a grand gaol and as a stronghold for gold and silver treasures. In 1255, under Duke Heinrich XIII, work commenced on the buildings in the main part of the castle. During the 14th century the fortifications were extended right around castle hill. From 1479 onwards Duke Georg the Rich set about turning the castle into the strongest fortress in the region.

The castle and its courtyards

The extended castle complex comprises a main part, with inner courtyard, plus five outer courtyards. Each of these sections fulfilled an important function and constituted a separate line of defence, with its own gatehouse, ditch and bridge. The first outer courtyard, closest to the main part of the castle, was important in protecting and supplying the innermost areas. Still existing here today is a once highly secure entranceway leading up from the town. The brewery and bakery (now the castle café) is the only historic building preserved in this courtyard. The second outer courtyard, housing the mighty arsenal and the master gunsmith’s tower, was the castle’s armoury. It is the best preserved of all the courtyards. The courtyard is dominated by the monumental Georg’s Gate, built in 1494. The third outer courtyard with a former building and Grain Keeper’s Tower was once used for stabling and as a store for animal feed. In the fourth outer courtyard is a jewel of late Gothic architecture, the outer castle chapel, also known as Hedwig’s Chapel, erected under Georg the Rich between 1479 and 1489. Living and working space for the court officials and craftsmen was located in the defensive towers in the ring walls around the fifth outer courtyard.

The accommodation for the ducal court towers over the inner courtyard at the south end of castle hill. The earliest parts here date back to the days of Duke Heinrich XIII. Much extension work was done under the Rich Dukes of Bavaria-Landshut, particularly after 1479 under Georg the Rich. His consort, Hedwig, daughter of the Polish king and the bride in the famous Landshut Wedding, resided here. At the outermost point is the ‘Palas’, or Princes’ Building, containing the duke’s private accommodation. On the side of the courtyard facing the Wöhr is the Bower which once housed the apartments of the duchess and her court. Today this is occupied by the Municipal Museum of Burghausen. On the town side is the ‘Dürnitz’ building, or Knights’ Hall, with its two impressive vaulted halls, formerly the wine cellar and the dining room for the ducal court. The hall on the ground floor is now a visitors’ centre, with a display of archaeological excavations. The gatehouse, fortified wall and keep form the bulwark to the first outer courtyard. From the fortifications there is an impressive view around the surrounding countryside. Access to the outer fortifications on the Eggenberg is also via these walls.

Castle Museum in the ‘Palas’ 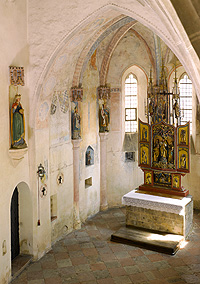 On the main floor of the ‘Palas’ are the medieval apartments of the Lower Bavarian dukes. The massive beamed ceilings and the furniture, weapons, tapestries, paintings and sculptures on display conjure up the life style of the Late Middle Ages and reflect the eventful history of the huge castle complex. The castle chapel, dedicated to St Elisabeth and a donation of Heinrich XIII, was fitted with a Late Gothic vaulted ceiling under Georg the Rich.

The State Gallery on the second and third floor is a branch of the Bavarian State Painting Collections. Displayed here are Late Gothic paintings of the 15th and 16th centuries, from the region of southern Germany, in particular Bavaria and neighbouring Austria. Six monumental paintings from a cycle on the history of the Bavarian dukes, painted by Hans Werl after 1600 for the Old Hercules Hall in the Munich Residence are one of the attractions of the castle. A selection of late medieval sculptures rounds off the exhibition.

The viewing platform on the roof offers a unique panorama of the entire castle complex and the surrounding countryside.

The Porter's lodge is suitable for banquets, receptions and civil weddings up to 60 persons.

The Knights' Hall is suitable for banquets, receptions, concerts and exhibitions up to 200 persons.

The Gothic Hall is suitable for exhibitions (otherwise only in connection with the Dürnitz or the castle courtyard) up to 99 persons.

The St Elisabeth's Chapel is suitable for weddings up to 100 persons.

The St Hedwig's Chapel is suitable for for weddings up to 110 persons.

The castle grounds are accessible to visitors at all times (exception: special events).

House of Photography –
Dr. Robert-Gerlich-Museum (belonging to the Town of Burghausen)
08677 4734
www.burghausen.de