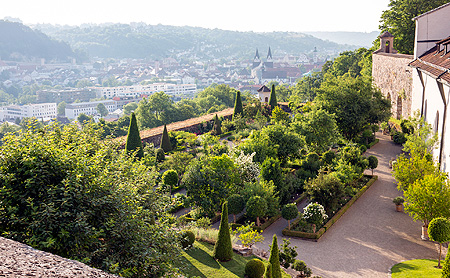 The Bastion Garden of Willibaldsburg Castle was laid out by the Bavarian Palace Administration on the basis of the "Hortus Eystettensis", a collection of copperplate engravings published by Basilius Besler (1561-1629) in 1613, and was opened to the public in 1998.

This informative garden, which shows the plant world documented in the historically important "Hortus Eystettensis", is probably unique in Germany. The flowers are planted according to their blooming seasons, as described in the book, and the complex is also a reminder of the famous botanical garden of Prince-Bishop Johann Conrad von Gemmingen, which was laid out by Besler from 1592.

Current information: No access by car or bus; footpath not barrier-free

Due to construction work, access to Willibaldsburg Castle by car or bus is not possible at present. There are only 2 disabled parking spaces available (by prior arrangement; phone +49 8421 602980). In order to use the parking spaces, a disabled person's ID card with the symbol aG must be presented. Please make an appointment at least one day in advance. There are no further parking possibilities.

Please note that the footpath to the castle (Mondschweinweg) is not barrier-free (gravel, steep incline, many steps).