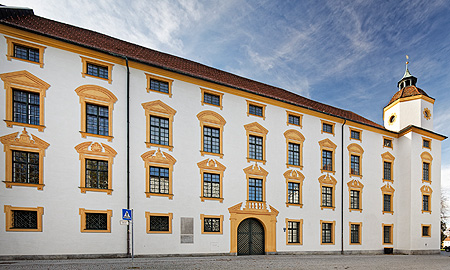 The Kempten Residence was the first monumental baroque monastery complex to be built in Germany after the Thirty Years’ War. After the destruction of the Benedictine Monastery that had originally been founded in 750, in 1651 the ambitious young prince-abbot Roman Giel von Gielsberg set about rebuilding the church and residence on a massive scale. For this major project he appointed the architect Michael Beer from Vorarlberg. When Beer resigned his commission at the end of 1653, the west wing of the Residence was complete and the foundations of the other tracts had already been laid. Sections of the abbey church had also been built. In the spring of 1654, Johann Serro from the Grisons came to replace Michael Beer. He built a sacristy connecting the church with the palace and in 1670 finished the main building. 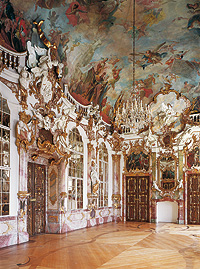 The decoration and furnishing of the prince-abbot’s apartments in the south wing of the Residence was completed from 1732 to 1742 by a team of top artists summoned by the knowledgeable Anselm von Reichlin-Meldegg, who had succeeded Rupert von Bodmann as prince-abbot in 1728. These included the painter Franz Georg Hermann who was responsible for the overall artistic concept, the sculptor Aegid Verhelst and the stucco-worker Johann Georg Üblher.

The sequence of the rooms is typical of the apartments of 18th-century regents: banqueting hall, antechamber, audience room, salon, bedroom. All that is missing is the cabinet that is usually adjacent to the bedroom, which has been replaced by the chancellery.

From 1732 to 1735 the team of artists worked on the actual residential rooms, which are in the late régence style, and from 1740 to 1742 on their crowning achievement, the Banqueting Hall, which is probably based on a design by Dominikus Zimmermann and is one of the most magnificent examples of the Bavarian rococo style. The rectangular hall two floors high with five window axes is distinguished by its subtle, well-balanced architectural design, and is decorated with elaborate stucco-work figure compositions by Johann Georg Üblher. The entire barrel vault is decorated with a ceiling painting by Franz Georg Hermann which glorifies the monastery and its history.

The unusual presence of sacral architectural and decorative elements in a royal palace and the strong, warm colours which give the rooms their cheerful and comfortable appearance make the prince-abbot’s apartments unique.

Visit only possible with a guided tour (in German; every 45 minutes)

No dogs or other animals may be taken into the Kempten Residence.