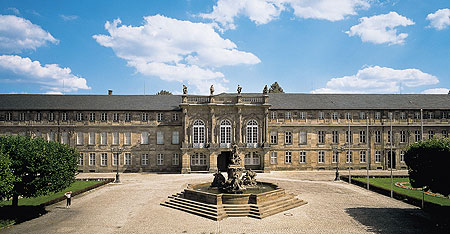 Although the Old Palace erected in the 17th century was an imposing building, it no longer satisfied the requirements of the baroque court. Its destruction in a fire in January 1753 brought forward the decision to build a new palace, which was thus begun in the same year under Margrave Friedrich von Brandenburg-Bayreuth. As with the Old Hermitage Palace, his wife Wilhelmine had a major influence on the design of the rooms. 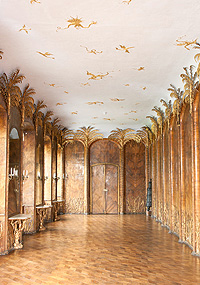 Highlights of the palace are the Cabinet of Fragmented Mirrors, the salon with its gold ceiling, Wilhelmine’s bedroom and the Old Music Room. In the southern wing of the palace is what is probably the finest interior in the Bayreuth rococo style: carved gilt palm trees, their crowns reaching into the sky, are set at intervals along the walnut panelling with its pronounced grain, creating the illusion of a palm grove for the guests who attended banquets here. After the main palace had been completed, in 1759 the margrave began the little, initially free-standing Italian Palace for his second wife, Sophie Karoline von Braunschweig-Wolfenbüttel, which was connected shortly afterwards with the southern wing of the New Palace.

At the end of the 18th century the gardens were turned into an ‘English-style’ park with winding paths and natural stands of trees. The dominant features of the geometric garden, the canal and three main avenues, have however remained. In 1990 the parterre in front of the south wing of the New Palace was reconstructed.

Visitors must wear at least a medical face mask during the tour of the Italian Palace.

There are no regular guided tours of the state rooms of the New Palace.