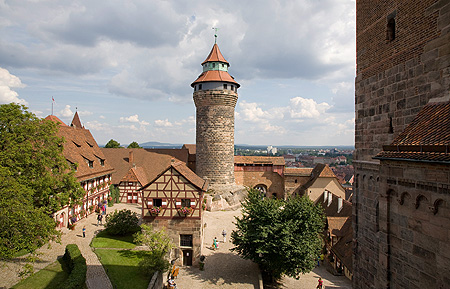 During the Middle Ages, the Imperial Castle in Nuremberg was one of the most important imperial palaces in the Holy Roman Empire. For centuries it stood at the heart of European history and was a secure base and prestigious residence for the Empire’s head of state. Erected over earlier buildings under the Hohenstaufen dynasty and its successors, the extensive castle complex is famous all over the world as the symbol of Nuremberg. The exhibition ‘Emperor – Empire – City’, with its tour of the historic rooms in the Imperial Castle, investigates how the Holy Roman Empire worked. It is presenting valuable works on loan and impressively staged in their authentic location, enabling visitors to experience Nuremberg’s golden age and the Castle’s unique history from the Middle Ages to the 19th century.

Upper chapel of the double chapel

The Romanesque Imperial Chapel is the most important part of the castle in art-historical terms. It was built around 1200 along with the ‘Palas’. The latter consists of a hall structure with two chambers one above the other, along with a residential wing with several chambers. The ‘Palas’ and double chapel were skilfully adapted to the irregular contours of the cliff.

Double chapels characteristically consist of two chapels with an identical ground plan placed one above the other, and they may be linked by an opening in the centre. The Imperial Gallery – a special aspect of the Nuremberg double chapel – gave the head of state direct access to the chapel from the upper hall and the imperial chambers of the ‘Palas’, while maintaining his distance from the imperial household. An oratory provided with heating was incorporated into it for Emperor Charles V in 1520.

The Germanisches Nationalmuseum is the largest museum of cultural history in the German-speaking countries and holds one of Germany’s most important collections of historical weapons. The museum’s ‘Imperial Castle Museum’ annexe presents numerous original items from its holdings. The collection provides insights into developments in technological and cultural history and the importance of historical weapons from the 12th to the 19th centuries – weapons that were used not only inside castles.

These insights into the history of arms are accompanied by authentic views from the windows onto the surroundings of the castle and the city hinterland – providing visitors with excellent ways of visualizing everyday history around the castle and world-historical events on the horizon from the height of the ‘Kemenate’ (Ladies’ Apartments).

The Sinwell Tower – the round tower in the outer bailey – was the keep that served for defensive and status purposes. Built in the late thirteenth century, the slim tower had an additional storey with a broad projecting platform and a Renaissance helm roof added to it in the 1560s. When the view of the Castle and the old town is compared with photographs from the period before and after the Second World War, the extent of the wartime damage and later reconstruction becomes clear.

The Deep Well at the centre of the outer bailey was very probably created in its earliest building period to provide an independent water supply for the Castle. The shaft goes down nearly 50 metres deep into the castle rock. A film showing a descent into it, and a vivid guided tour, enable visitors to appreciate its depth.

The small hall in the Finanzstadel is suitable for concerts, lectures and readings up to 80 persons.

The Wedding Room is suitable for civil weddings up to 60 persons.

The Knights' Hall is suitable for candle-lit festivities, receptions, banquets with or without buffet and concerts up to 300 persons.

The inner castle courtyard is suitable for receptions up to 400 persons.

The Deep Well can only be visited with a guided tour.

Visitors can go around on their own in the Palas and Kemenate.

There is an audio guide to the Palas (German, English, French, Italian, Spanish, Russian, Czech; with costs).

Kaiserburg-Museum
(Branch of the Germanisches Nationalmuseum)