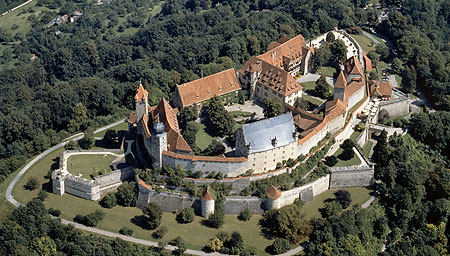 The castle was first mentioned in a document in 1056. In 1353 it became the property of the House of Wettin. Because of its strategic importance it was enlarged over the next 150 years to become one of the largest castle complexes in Germany. After the court transferred to the city in the 16th century, the castle served solely as a state fortress.

One of its most famous guests was the reformer Luther, who worked on his translation of the Bible here in 1530 during the Diet of Augsburg. It was not until the reign of Duke Ernst I (1806-1844) that any further significant building work was undertaken. In the 18th century, Karl Alexander von Heideloff renovated the castle in a highly ornamental neo-Gothic style. From 1906 it underwent further alteration by the castle historian and architect Bodo Ebhardt.

Today the complex houses the art collections of Coburg Castle. They are among the most important art and cultural history collections in Germany, and consist largely of the treasures originally acquired by the Coburg dukes. The museum comprises a copper engraving collection, a collection of hunting weapons and glass and a collection of carriages and sleighs. Among the works of art of particular interest are paintings by Lucas Cranach and other old German masters (Dürer, Grünewald, Holbein) as well as sculptures by Tilman Riemenschneider.

The museum at Coburg Castle is not run by the Bavarian Palace Administration.