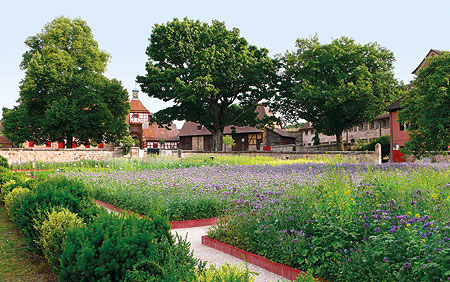 The earliest proof of a garden within the castle walls is a drawing by Landgrave Moritz von Hessen from the year 1629. In this sketch the outer bailey between the horse pond and neck ditch is marked ‘pleasure garden’. It was presumably laid out when the New Palace was enlarged during the Renaissance, as the decorative gables of the extension face the garden area. The pleasure garden was initially surrounded by a simple paling fence, which was replaced in 1736 by the present massive garden wall.

Opposite the walled garden there was originally a large, slightly angled half-timbered barn, the ‘granary’, built before the Thirty Years’ War. The ground floor of this building was a cattle stall, while the upper floors were used mainly for storing grain, but also for hay. At the beginning of the 19th century the half-timbered building was in a very poor condition. In 1864, because of its advanced dilapidation, the large middle section of the granary was demolished, while the two ends, the present rectory and the former school house, remained standing. The former granary and the so-called ‘oat barn’ show how important a fortified castle was for the secure storage of food staples. 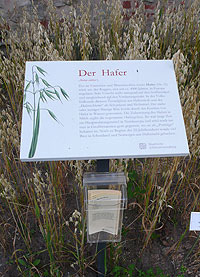 Because of the former importance of the castle for the food supply, a few years ago the Bavarian Palace Administration had the castle garden planted with the most important historical varieties of grain and the three best-known pseudocereals, amaranth, quinoa and buckwheat. Free recipe sheets for the individual cereals and the bread spice plants also grown here are available so that visitors can sample the old varieties of grain at home.

Garden open all year round

Cadolzburg
www.bahn.com
(20-minute walk from the station to the castle)

'Höhbuck' (10-minute walk to the castle)