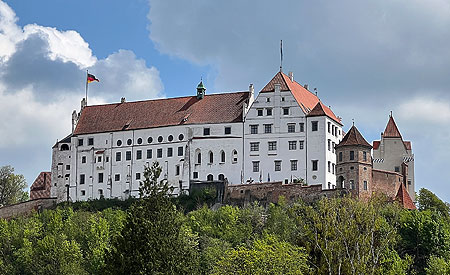 Trausnitz Castle, a massive building complex that towers above the town of Landshut, was founded in 1204 by Duke Ludwig I, the ‘Kelheimer’. For 250 years this ancestral seat of the Wittelsbachs was the residence and seat of government of the dukes of Lower Bavaria. The ‘Rich Dukes’ of Bavaria-Landshut, Heinrich, Ludwig and Georg, ruling in the 15th century, played a particularly influential part in the castle’s development. Even today, at four-yearly intervals, the town still celebrates the ‘Landshut Wedding’, re-enacting the wedding of Georg, son of Ludwig the Rich, to Hedwig, the daughter of the Polish king, in 1475.

In the 16th century important additions were made to the castle and it acquired some of the attributes of a Renaissance palace. Thus today the exterior of Trausnitz Castle is dominated on the one hand by its medieval buildings such as the almost intact ring of fortifications with its peel towers, gate buildings and sections of the original battlements, as well as the high keep, known as the Wittelsbach Tower. With the magnificent inner courtyard with its arcades, on the other hand, the castle displays its Renaissance heritage. 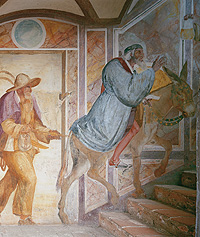 Included in the tour of the castle are medieval halls and the castle chapel with its important sculptures and the winged altarpieces of the Rich Dukes. The Renaissance epoch is represented with vaulted cabinets, panelled rooms and the famous Fools’ Staircase with its monumental scenes from the Italian Commedia dell’arte. One room documents the former splendour of the ‘lodging’ created for King Ludwig II of Bavaria. The tour culminates with a view of the town from the balcony.

The ‘Kunst- und Wunderkammer Burg Trausnitz’ (Chamber of Art and Curiosities), a branch of the Bavarian National Museum, is a collection of 750 exhibits including works of art, treasures from the Orient and curiosities typical of the collections owned by rulers in the Renaissance era.

The Knights' Hall is suitable for banquets, receptions and exhibitions up to 235 persons.

The White Hall is suitable for banquets, receptions, exhibitions and concerts up to 310 persons.

St George's Chapel is suitable for religious services and weddings up to 100 persons.

The tower terrace is suitable for receptions up to 99 persons.

The Small Knights' Hall is suitable for receptions and small banquets up to 50 persons.

Monday to Saturday: Visit only with a guided tour (in German; every half hour)
Sunday/holiday: No tours; visitors can go around on their own

In the Chamber of Art and Curiosities there are no regular guided tours.

Trausnitz Castle (including the Chamber of Art and Curiosities):
5.50 euros regular
4.50 euros reduced

Bus number 7 or 7A from 'Altstadt' to 'Kalcherstraße' (way to the castle: ca. 1 km); additional stop on demand from March to October at 'Hofgartenparkplatz'