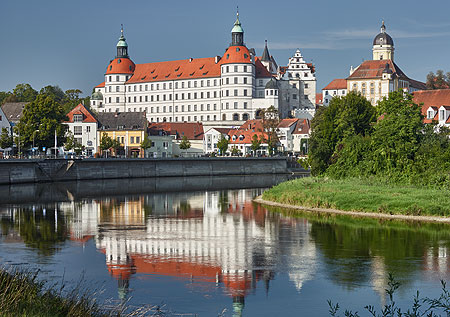 Neuburg Palace on the banks of the Danube was once the residence of the principality of Pfalz-Neuburg, founded in 1505. This impressive palace complex, with its four mighty wings enclosing an arcaded courtyard, was built on the site of a late-Gothic ducal castle. Work started on the three splendid Renaissance wings in 1530, under Count Palatine Ottheinrich (1502-1559), the first sovereign of Pfalz-Neuburg and later Palatine Elector. Count Palatine Wolfgang von Zweibrücken commissioned the Dutch master Hans Schroer to decorate the courtyard façade. Carried out between 1560 and 1562, these biblical scenes in sgraffito technique are one of the special attractions of the palace.

From 1664 until 1668 Count Palatine Philipp Wilhelm had the Baroque east wing built between massive round towers and the palace grottos, thereby creating one of the first Baroque residences. The palace chapel painted with a Lutheran cycle of pictures by Hans Bocksberger is an outstanding monument to the Reformation; it is also the oldest church building designed for Protestant services. 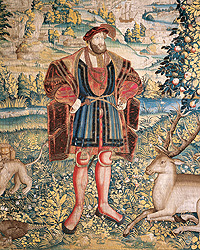 The main floor in the Baroque east wing of the palace is dedicated to the art and history of the principality of Pfalz-Neuburg. Emerging in 1505 out of a dispute over succession between the Palatine and the Bavarian Wittelsbachers, this tiny principality went on to play a remarkable role over the course of the following centuries. Under the Renaissance Count Palatine Ottheinrich it was a centre for the arts and for the nascent Reformation movement. In the 17th century, after the addition of the Dukedoms of Jülich and Berg of the Lower Rhine, it became an important Baroque court with connections throughout Europe. Dukes from Neuburg were also Palatine Electors with residences in Heidelberg, Düsseldorf and Mannheim. In 1806, Neuburg became a part of the Kingdom of Bavaria.

The former residential and state rooms of Neuburg Palace now host an impressive display of the history of this principality. 550 works of art – portraits and valuable tapestries, weapons, furniture and precious craftwork – bear witness to this exciting chapter in Palatine-Bavarian history.

Among the most precious treasures housed in Neuburg Palace are the ecclesiastical textiles from the Ursuline Monastery of Neuburg, founded by Elector Johann Wilhelm von der Pfalz in 1698.

These sumptuous sacred vestments and important altar antependia with biblical scenes were embroidered in silk, silver and gold by the Ursulines in the 18th century. They are of outstanding artistic quality. Rounding off this display on the third floor of the east wing are sacred works of art from the period of the Counter-Reformation in Pfalz-Neuburg and religious folk-art.

In the State Gallery of Flemish Art in the west wing are numerous works of masters such as Peter Paul Rubens, Anthonis van Dyck and Jan Brueghel.

The Green Hall is suitable for receptions, banquets, concerts, conferences and exhibitions up to 190 persons.

The White Hall is suitable for receptions, banquets, concerts, conferences and exhibitions up to 190 persons.

Einsäulensaal (Hall with a single column)

The hall with a single column is suitable for small exhibitions and receptions up to 100 persons.

The palace chapel is suitable for concerts and weddings up to 140 persons.

The Blue Foyer is suitable for small events and receptions up to 30 persons.

The Knights' Hall is suitable for receptions, banquets, concerts, conferences and exhibitions up to 300 persons.

The Small Knights' Hall is suitable for banquets and concerts up to 40 persons.

The Knights' Hall is suitable for civil weddings and classical concerts up to 100 persons.

The palace courtyard is suitable for open-air-events, concerts and receptions up to 1000 persons.

The palace terrace is suitable for civil weddings up to 100 persons.

The branch museum of the State Archaeological Collection will be closed for reconstruction work until further notice.

Information sheet on Neuburg Palace for people with a handicap