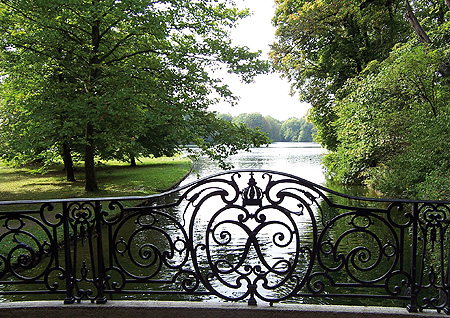 To mark the birth of the long awaited heir Max Emanuel in 1663, the Bavarian elector Ferdinand Maria presented his consort Henriette Adelaide with Kemnat, a farm to the west of the residence city of Munich. A year later a palace was begun from plans by the Italian architect Agostino Barelli. At the beginning of the 18th century, Max Emanuel himself enlarged Nymphenburg, transforming it into a representative summer residence. 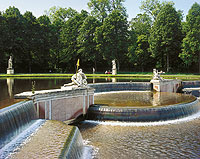 An extensive, extremely elaborate canal system was built and from 1701 on fed water from the River Würm into Nymphenburg to supply the Baroque waterworks, wells and fountains.

In 1715 Max Emanuel had a magnificent Baroque park laid out by the French garden designer Dominique Girard and Joseph Effner from Dachau, the architect responsible for the palace. The central canal with the marble cascade on the west border of the garden remains as an indication of its former splendour.

At the beginning of the 18th century, the court garden superintendent Friedrich Ludwig von Sckell turned the formal park into a modern landscape garden in the English style. Sckell retained the basic symmetrical form and transformed the avenues, some of which are very long, into meadow valleys with woodland borders that formed an irregular wavy line and looked very natural.

Traces of the 18th-century Baroque axes, now in a landscaped form that has softened their original rigidity, can still be seen leading off into the distance. Sckell left the central axis largely as it was. He replaced the ornamental parterres with grass and turned some of the existing canals into natural streams. He also created new lakes in front of the Badenburg and Pagodenburg, two 18th-century park pavilions, which fitted in perfectly with the picturesque park landscape.

Sckell gave the former hunting wood a new structure with attractive contrasts, so that the park not only has old oak trees but also individual linden trees from the Baroque avenues that he preserved and integrated skilfully into his garden design. This mixture of trees, the varied use of space and the natural-looking bodies of water all combine to give the palace park its special quality.

Further information and tips for visitors can be found at
www.schloss-nymphenburg.de

The other park gates will be closed half an hour earlier.

The fountains usually run from Easter to mid-October from 10 am to noon and from 2 pm to 4 pm.

The historical pump systems in the park’s pump houses must remain closed until further notice.

During the summer season, gondola rides are offered every day (in fine weather) on the central canal. Further information can be obtained at www.gondel-nymphenburg.de or by calling the gondola ride number 0175 6000468.

Exhibition on the park

The exhibition "Friedrich Ludwig von Sckell and Nymphenburg" at the Geranium House must remain closed until further notice.

There is a passage from the palace park to the Munich Botanic Garden
www.botmuc.de

Tram to "Romanplatz",
bus or tram to "Schloss Nymphenburg"