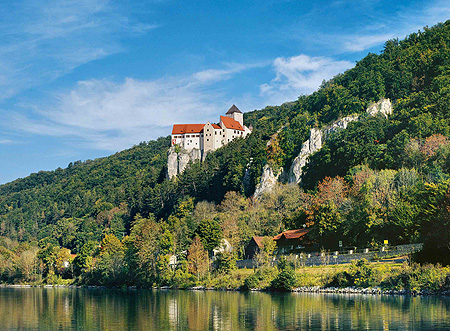 Prunn Castle, perched on an almost vertical crag high above the River Altmühl in the Jura southwest of Regensburg, is a picture-book knight’s castle. First mentioned in a document in 1037, by the mid-12th century it had become a romanesque stronghold. One of the oldest elements of the castle is the keep, which has a height of 31 metres.

The castle first came into the possession of the Wittelsbach family when it was bought by Duke Ludwig of Bavaria in 1288. In 1338, however, Prunn Castle changed ownership again and passed to the Fraunberg knights of Haag. Their coat of arms, a white horse on a red background, is still visible from a considerable distance on the castle wall.

Under the Fraunberg knights in the 14th century – the late gothic era – the castle became a cultural centre devoted to minnesong and Middle High German poetry. Evidence of these activities is provided by fragments of frescoes in the former guardroom and the discovery of a manuscript of the Nibelungenlied, the so-called ‘Prunner Codex’. The ‘Prunner Codex’ was discovered by Wiguläus Hund, humanist and historiographer of Duke Albrecht V, and placed in the duke’s library in Munich in 1575. Today this valuable manuscript is kept in the Bavarian State Library in Munich.

In 1672, after several more changes of ownership, the castle was acquired by the Jesuits of Ingolstadt. Their most important legacy is the palace chapel, which they remodelled in the baroque style in around 1700. In 1822, when Prunn ceased to exist as an administrative entity, the castle finally returned to the Wittelsbachs. In 1827 King Ludwig I ordered it to be preserved as a historic monument, just in time to prevent it from falling into ruin.

Visit only possible with a guided tour.

April-October: Guided tours (in German) every hour on the hour; last guided tour at 5 pm