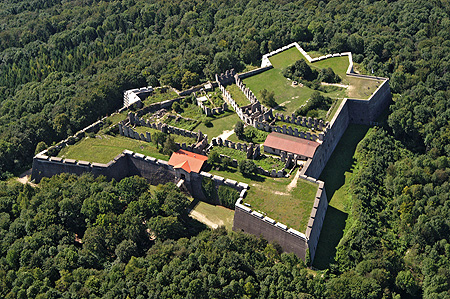 A medieval castle originally stood on the site of the baroque fortress: a Hilpold von Rothenberg was mentioned for the first time in 1254. Rothenberg was later owned by the burgraves of Nuremberg, followed by Emperor Karl IV, who as King of Bohemia thus acquired a new outpost. In 1401 King Ruprecht took the castle from King Wenceslas in Bohemia. During the Thirty Years' War, the castle was occupied by Bavarian troops, posing a considerable threat to the free Protestant city of Nuremberg.

In the Spanish War of Succession, the now heavily fortified castle was taken in 1703 by the imperial troops and completely destroyed. After the peace treaty of 1714, Elector Max Emanuel rebuilt it as an even more powerful fortress, which proved its worth in the Austrian War of Succession when it withstood an attack by the Austrian army. After the Napoleonic Wars the fortress declined in importance, and in 1841 was abandoned and fell into ruin.

In 1966 the ruined fortress passed to the Bavarian Palace Administration, which is now taking steps to prevent its further decline; the Schnaittach bastion is being made accessible as a viewing platform and a large part of the massive casemates will be opened up for guided tours.

The visit of the casemates is only possible with a guided tour.

Information on the admission charges you will find on www.heimatverein- schnaittach.com.

The Fortress is not run by the Bavarian Palace Administration and can therefore not be visited with the annual season tickets and 14-day tickets.

Not accessible for wheelchair users