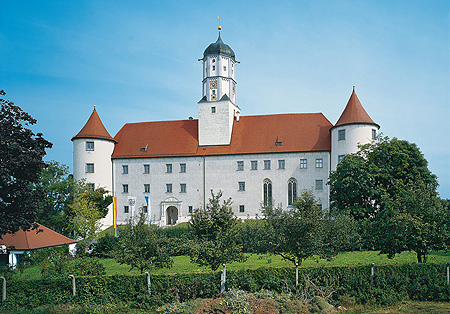 Höchstädt Palace is one of the outstanding monuments of the former Principality of the Palatinate-Neuburg. It was built following the marriage of Philipp Ludwig, Count Palatine of Neuburg, to Anna of Cleves (daughter of the Duke of Jülich-Cleves-Berg) in 1574. In the marriage settlement, the Count Palatine agreed to build an appropriate dowager’s residence for his spouse.

In 1589–1602, masons from the canton of Grisons in Switzerland erected the new building in late Renaissance style, based on designs by Lienhart Grieneisen and incorporating the Gothic tower of the earlier castle. Duchess Anna lived as a widow in Höchstädt from 1615 to 1632. Although her son Wolfgang Wilhelm enforced the Counter-Reformation in Neuburg for political reasons, she continued to hold fast to the Protestant faith in the Palace – as can still be seen from the fresco paintings in the vaulting of the Palace Chapel, which are among the finest artistic achievements of southern German Protestantism before the Counter-Reformation. After 1632, the Palace was only used for less important purposes, so that much of the original appearance of a late Renaissance princely residence has survived

Beyond the potter's wheel …

2010 the Bavarian Palace Administration established the Museum of German Faience in Höchstädt Palace. Visitors can enjoy a unique museum that reveals the world of German faience in the 17th and 18th centuries.

The exhibition includes some 1000 exhibits in a space of nearly 900 square metres, providing a lively overview of the history and technique of faience. There is information about the manufactories’ production methods and the items they made, and the importance of faience for the dining style and domestic décor of the period is explained. Visitors can appreciate why faience was so widely used and valued at that time. What is faience and how is it manufactured? Answers are available all round a replica kiln. Other faience items are presented in the settings in which they were originally used – for example, on a magnificently laid banquet table and in the display kitchen, with crockery and original cooking recipes.

Children and adults can join in – there are entertaining and sensory elements and demonstrations that encourage careful inspection and experimentation.

The Battle of Blenheim, near Höchstädt, 1704

Höchstädt became famous due to a battle that changed the course of history in Germany and Europe. Within sight of the Palace, the Bavarian–French alliance was defeated by British and imperial armies led by the Duke of Marlborough and Prince Eugene of Savoy on 13 August 1704. The victory at Blenheim (‘Blindheim’ in German) was a turning-point in the War of the Spanish Succession – the first global conflict among the European powers. France was left on the defensive after the battle, and Britain’s rise to become a world power began. The principle of the ‘European balance of power’ emerged and was to shape the policies of Europe’s great powers thereafter. However, the outcome of the battle brought Bavaria a decade of oppression under Austrian occupation, and the Elector of Bavaria, Max Emanuel, went into exile. The permanent exhibition provides a fascinating and powerful account of the battle and its political context.

The palace cellar is suitable for receptions, banquets and conferences up to 130 persons.

The Knights' Hall is suitable for concerts, lectures, ceremonies, conferences and civil weddings up to 200 persons.

The large conference room is suitable for conferences, lectures and receptions up to 80 persons.

The small conference room is suitable for conferences, lectures and receptions up to 50 persons.

The palace courtyard is suitable for concerts, receptions and markets up to 650 persons.

Chapel and exhibition rooms accessible for wheelchair users; toilet for the disabled available