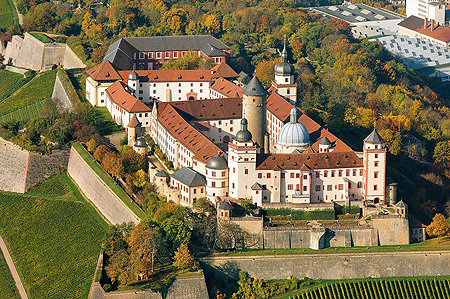 The original castle on the Marienberg, a hill which was first settled in the late Bronze Age, was probably a small fort built early in the 8th century by the Franconian-Thuringian dukes. The circular Marienkapelle is one of the oldest church buildings in South Germany and dates from around 1000. From 1200 an unusually large castle was built, which was extended during the late Middle Ages and the Renaissance. For half a millennium, from around 1250 to 1720, the Marienberg was the ruling seat of the Würzburg prince-bishops, who also held the title of Duke of East Franconia.

Following the storming of the castle by the Swedes in 1631, Prince-Bishop Johann Philipp von Schönborn built a circle of massive bastions, which are the dominant feature of Marienberg Fortress. In 1945 the fortress was almost completely burned out, and its reconstruction was only completed in 1990.

St Mary’s Church (Marienkirche), which dates back to AD 706, the forty-metre-high keep and the well house with a cistern over 100 metres deep are impressive monuments to an over 1000-year history.

The 1,300 square-metre Princes' Garden is accessible from the castle courtyard: it was reconstructed in on the basis of plans dating from the early 18th century.

In the Arsenal and the Princes’ Building, the "Museum für Franken - Staatliches Museum für Kunst- und Kulturgeschichte in Würzburg" shows an outstanding collection of art treasures. The museum is not operated by the Bavarian Palace Administration.

The fortress church is suitable for concerts, catholic weddings, religious services and christenings up to 55 persons.

The castle tours at Marienberg Fortress take place at present.

An online reservation via our reservation website is required for the visit (maximum 7 days in advance; booking deadline for the next day is always at 5 pm).

Museum für Franken
(The museum is not run by the Bavarian Palace Administration and can therefore not be visited with our annual season tickets and 14-day tickets!)

Guided tours of the fortress

Rooms in the fortress only accessible via staircase; round church and water well accessible for wheelchair users

Bus to "Festung"
(April-October only)
www.wvv.de